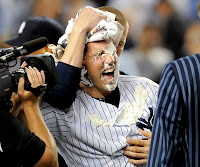 The Yankees beat the Twins 5-4 in the eleventh inning of Friday night's ALDS Game 2 on Mark Texeira's walk-off homer, which was only possible because Alex Rodriguez slugged a tying two-run homer in the bottom of the ninth.

The Twins believe that they were robbed by Phil Cuzzi, the left-field umpire who incorrectly called a would-be Joe Mauer double a foul ball in the top of the eleventh inning. More egregiously, Melky Cabrera touched the ball, so it was in play even if it had landed foul. Joe Mauer would later single in the at-bat, but remain stranded after two base hits that would have scored him.


As things ended up, however, David Robertson got out of a bases-loaded, none out jam to earn the win. Mark Texeira had pie smeared on his face by A.J. Burnett, who turned in six innings of one-run ball despite hitting two batsmen. Burnett was helped by a base running blunder by Carlos Gomez, who slipped near second base as the trailing runner. Gomez attempted to crawl back to second, only to be tagged out by Derek Jeter to end the inning before the lead runner had a chance to score.


The Twins should get over the bad call. They need to go into tomorrow's game with their heads on their shoulders instead of steaming over how they were robbed by the umpires.

Popular posts from this blog

I haven't blogged in a while but I had a bunch of new Chrome extensions I wanted to share. 1. Crypt-Up . Emails are very insecure; they bounce around weird servers that you cannot control. And encryption has been very annoying. Crypt-Up is an extension that beautifully implements PGP encryption for Gmail. (Right now, it's only for Chrome but mobile apps are being planned.) Under the PGP encryption scheme, every user has a private key and a public key. The private key is kept secret, and the public key has to be shared. To send an encrypted email, the sender uses the recipient's public key to scrambled the email. The recipient's private key is the only (known) way to unscramble it. Crypt-Up does a good job of keeping track of private and public keys, and sending emails. You can export your private key to use other PGP products and import your friend's public keys so you can send them emails even if they don't use Crypt-Up. Try it out! 2. Script-Safe . Do you
Read more

February 03, 2012
I recently moved offices and decided it was time to have a real phone system. At first, I looked at expandable phone systems such as the Panasonic KX-TS4200B  but the reviews weren't too favorable, and it would require some new wiring to be run. Next, I considered the XBlue X16 , which sounded great. However, there was not a lot of information about the company so I decided to chose a vendor that would stick around and deliver customer service in the future. I considered running my own Asterisk VOIP PBX server, but that was just too involved and unreliable. Finally, I decided upon VOIP phone service with 8x8 (formerly known as Packet 8). VOIP is short for Voice Over IP, or phone calls over the Internet. I'm pretty comfortable with the technology, but many users may prefer to stick with regular copper phone lines for better reliability.
Read more

March 04, 2012
The HP ProLiant Microserver  has been a popular platform for small businesses and home users who want to run Windows Home Server 2011 . RAID is a technology that stores data across multiple drives for redundancy against hard drive failure or for extra speed. There are different kinds of RAID arrays. I will explain how to set up a RAID 1 array, which mirrors (copies) data on two drives to keep the data safe even if one of the drives fail.
Read more